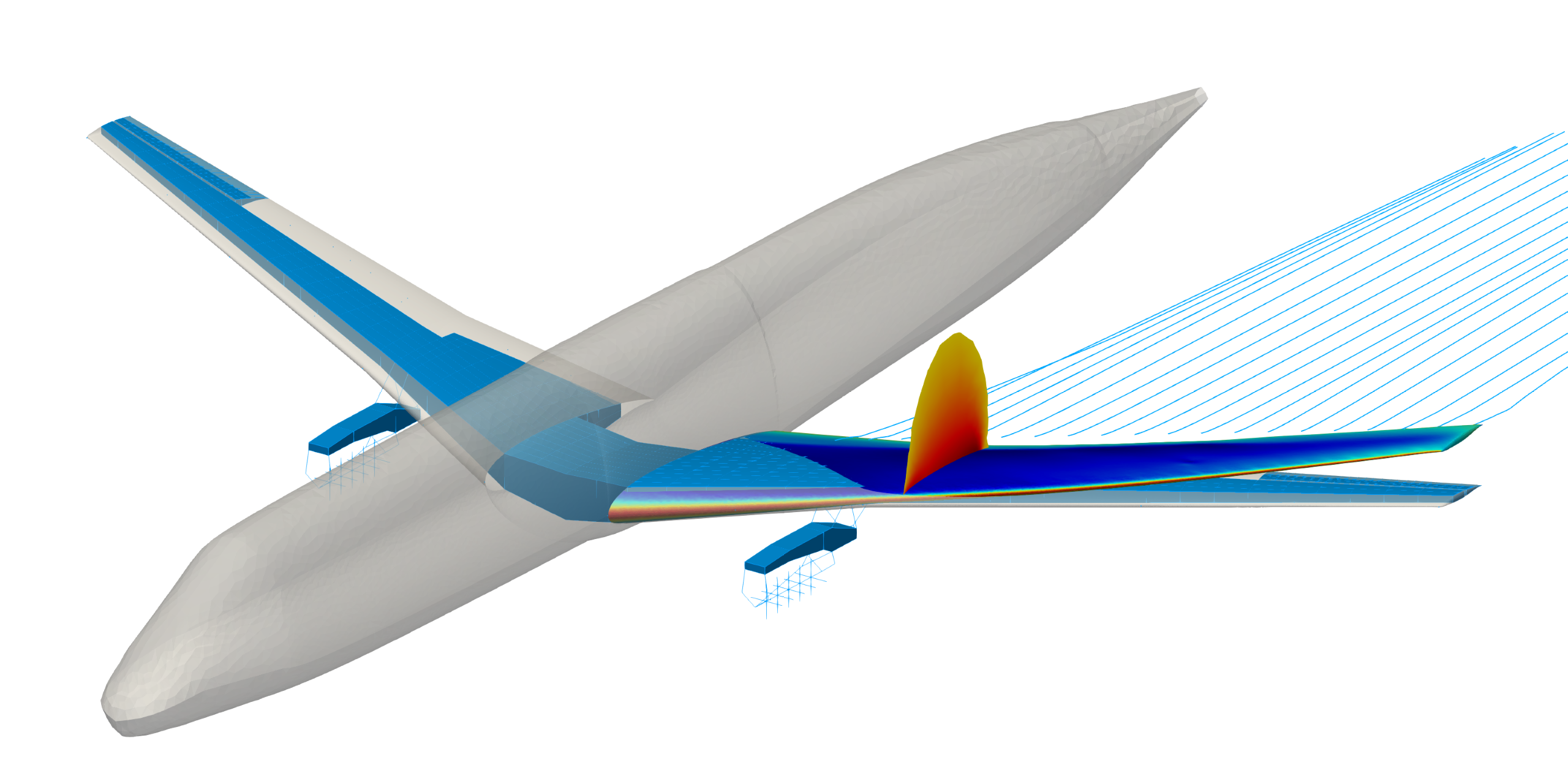 Modern aircraft usually have light and flexible wings with large aspect ratio, which are subjected to significant deformations. The aeroelastic behavior of such wings is of paramount importance as it affects both the structural design and the aircraft performance. The present thesis aims at assessing the impact of aerodynamic modeling on transonic aerodynamic and aeroelastic com- putations performed in the preliminary stage of the aircraft design process, and at developing an aerodynamic modeling tool performing such computations with low computational cost.
First, the different levels of fidelity commonly used for aerodynamic modeling in aircraft design are investigated. The aerodynamic loads predicted by the different models and the compu- tational cost of the solutions are compared using two rigid wings simulated in transonic flight conditions. The results show that linear modeling is not suitable for transonic flow calculations as it cannot capture shocks, and that higher-fidelity models are too computationally expensive to be used routinely in the preliminary design stage. On the other hand, nonlinear potential solutions offer an excellent trade-off between accuracy and computational cost. Accordingly, the main full potential formulations and their solution techniques are subsequently reviewed.
Two specific methods for solving the full potential equation are then developed and imple- mented. The first is the field panel method, an extension to the widely used and computationally effective panel method. Numerical calculations show that the iterative field panel approach im- plemented during this work yields satisfactory results for subcritical flows, but smears shock waves and thus cannot model transonic flows accurately. Moreover, the computational cost of the method is prohibitive for such computations. The second method is based on a continuous Galerkin, unstructured, finite element formulation. The code developed in the context of this work, Flow, is compared to a commercial state-of-the-art solver, Tranair, using various two and three-dimensional cases. In practice, Flow is as fast and almost as accurate as Tranair, but is open-source.
The modular design of Flow allows the code to be easily coupled with CUPyDO, an in-house fluid-structure interaction code, which is then used to perform static transonic aeroelastic com- putations. In this context, the different aerodynamic levels of fidelity are compared using a flexible benchmark wing. For the wing shape considered in the present work, the results illus- trate that linear potential methods yield sufficiently reliable static deformations, provided they model wing camber. On the other hand, nonlinear methods yield more accurate aerodynamic predictions but their computational cost is significantly higher. Consequently, static aeroelastic computations could be efficiently performed following a multi-fidelity approach, whereby a lin- ear model would first be used to obtain the deformed wing shape, and a nonlinear model would then be used to compute the aerodynamic loads on that deformed wing shape.

The defense (in English) will take place on December 14th at 9:00 and is accessible to all via Lifesize meeting: https://call.lifesizecloud.com/6771032